Did you know that pine needles can provide you with more vitamin C than orange juice? And that they can help to heal your body from respiratory ailments, colds, and the flu?

Some say that the Native Americans taught the early settlers about drinking pine needle tea to help prevent death from scurvy!

Pine needle tea is easy to make, but what are some other things that can be done with pine needles?

They can be infused into a variety of menstrums (liquids used to extract the nutritional or medicinal properties of plants) other than water.  For example, tonight I got a nice dose of vitamin C by using vinegar infused with pine needles in my salad dressing.  White pine needle vinegar (the type I made) tastes similar to balsamic vinegar.

First, you’ll need to gather some needles. I collected a bunch from a white pine. 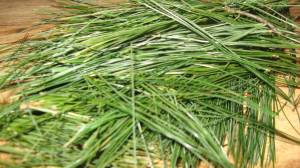 Pick through them to ensure the best ones are being added to glass jars. I also tore these up as I was adding them. 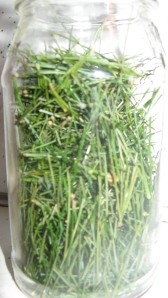 And then cover with the menstrum. In this case, it’s apple cider vinegar.  I get large jugs of the raw kind so I boiled some first to ‘pasteurize’ it before making this vinegar (and I was able to boil enough extra for future use). Make sure to completely cover the needles — poke them down so that they’re an inch below the liquid line. 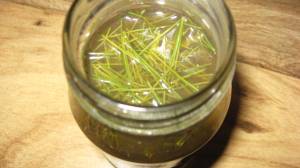 Let the finished product sit for 4-6 weeks before using.  Also, use a plastic lid or put a piece of wax paper on top because vinegar will eat away at the lid. 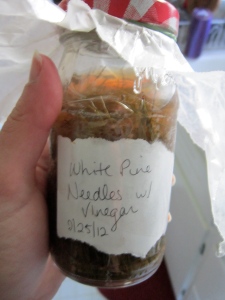 What’s another use for the pine needles?  Infuse them in olive oil!  The oil can then be used as a relaxing massage oil or as a chest rub to help with respiratory issues.

Cover a jar full of pine needles with the oil and let sit for 4-6 weeks. 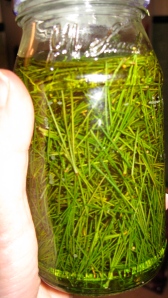 When you’re ready to use the oil, strain the needles out. 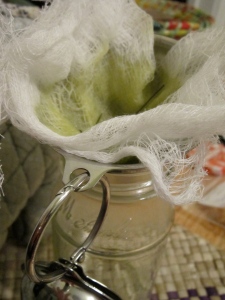 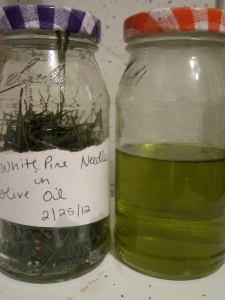 The oil can also be turned into a salve that can help to remove splinters (although it seems that the actual sap of a pine tree might be best at this!), or it can be put on small wounds to help them heal.  I’ve also been having a fun time using it as a lip balm!

To make a salve, create an easy double boiler by putting a measuring cup into a pot of boiling water.

Add 2 Tablespoons of beeswax (I just guessed at the amount when I made this…) to the measuring cup and let melt. 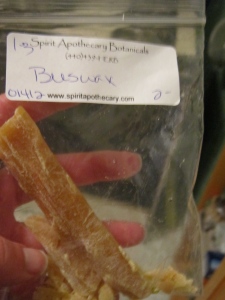 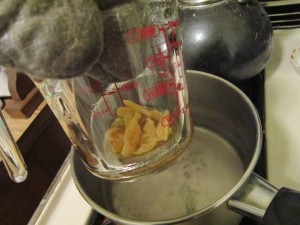 After it has melted, add 2 ounces (1/4 cup) of the oil infused with pine.  Stir with a chopstick until you reach an even consistency.  Test to see if you’re done by putting a drop on your counter. It will allow you to quickly see if the salve is firm enough or too runny.  Too runny? Add more beeswax. Too firm? Add more oil. 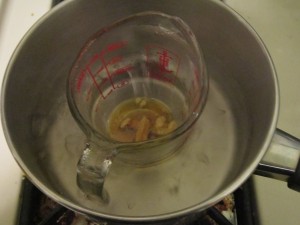 When the mixture is consistent, pour it into a reused container and let sit to become a salve!  Use and enjoy knowing exactly what went into your product! 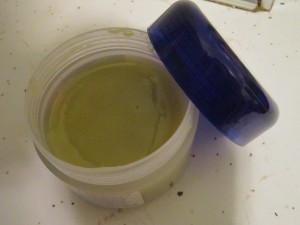 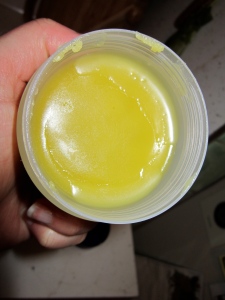 Also on ‘these light footsteps’

12 thoughts on “Remember to Take Your Pine Needles for Good Health!” 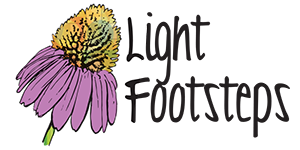 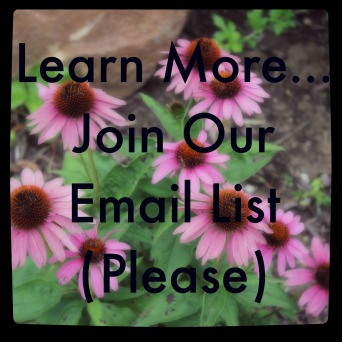 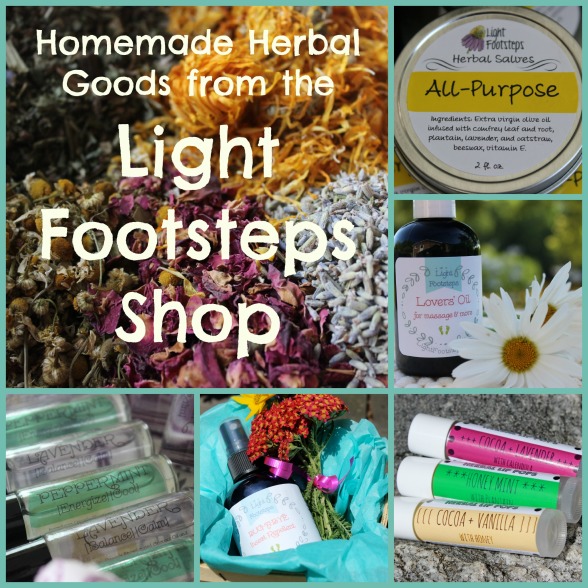